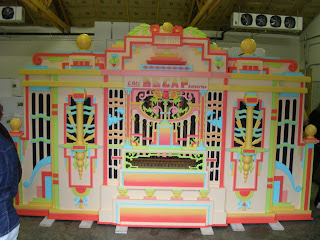 In 2009 Les Asplund and I work on this Decap merry-go-round mechanical orchestra facade. The original was built in the 1920's. You can see more about Decap at http://www.decap-herentals.be/. We spent about 150 hours creating the two outside panels as well as the full top section. Unfortunately Frank passed away before it was finished but his organ still stands.He was always ready with a pun about his organ's. He has a dozen or so stored at his winery. Ask at the wine tasting bar to see them.

His wife Betty and friends painted it this summer (2010). There was a public showing at their winery, Greenbank Cellars, in Greenbank, Washington on Whidbey Island.

The project had its' challenges. The schematic was only a basic template from which we had to interpret the three dimensional design. There was a fair amount of template making as well as turning to complete our portion of the 13' 6" x 7' facade. Most of the work was done in poplar solids or poplar ply. It had to come apart for transport. 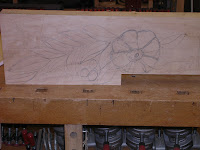 Drawing for the above carving